Under the project plan following, “making a pilgrimage of 88 temples on the island of Shodoshima, meeting a psychic by accident during the process of the pilgrimage, and making a statue which based on the psychic’s spiritual vision.”, oddly enough, I met a psychic by accident just as planned, produced the works based on a dialogue with the psychic, which are personal and also have a multiple meaning. This project contrasts with “Dreaming a same dream”, another project in the same period in Shodoshima, I intended to oppose psychic vision which is peculiar perceptual phenomenon, against dream which is common and anyone has experience. However I started this project from intellectual curiosity, the experience I obtained is indescribable.
The psychic I met in Shodoshima was a monk of Esoteric Buddhism. He and I lived under the same roof for a week, maintained a dialogue, some time while exploring the island, and other time till daybreak. The dialogue between us was called “session”. The works on this page and the following are the part of which I interpreted his vision and word, and gave shape to them in my own way.

Tuning Fork
2009
Mortar, magnet, iron sand, amplifier, speaker, audio player, wardrobe
w48×h57×d28cm
The monk said that he sensed two figures behind Shiina. This work gives shape to the two figures. According to the monk with clairvoyant, the thought that people once hold never disappear but stick to the person like iron sand attracted by a magnet. He also said that to pray is an act to remove the iron sand one by one, and ask the gods and Buddha to take charge of them. The vibration sound that heard faintly from the inside of the work was made by synthesizing the sound of the guitar played by the monk and the sound of sine wave. 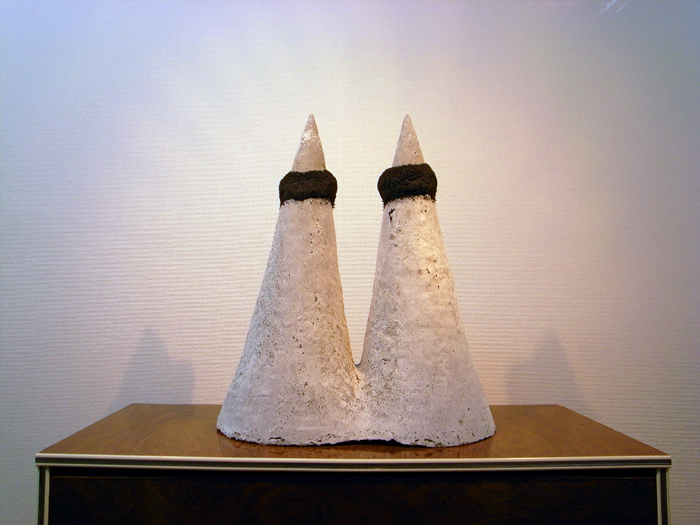 Fresh Vegetable
2009
Mortar with paint
12×25×20cm
In the dialogue with the monk, Shiina was pronounced that he is fated to spend the unfortunate life because in the past he picked up a stone which is not allowed to pick up for spiritual reason. However, Shiina was born to be an artist, apply yourself to making your art work more than before, and send out your art from your fingers to the world, the monk encouraged Shiina sadly and painfully. Shiina listening to the monk’s words while getting dead drunk, determined to create a new sculpture as fresh and crisp as a lettuce which he was eating by chance at that time, but afterward he made a sculpture of lettuce that does not resemble a lettuce at all. 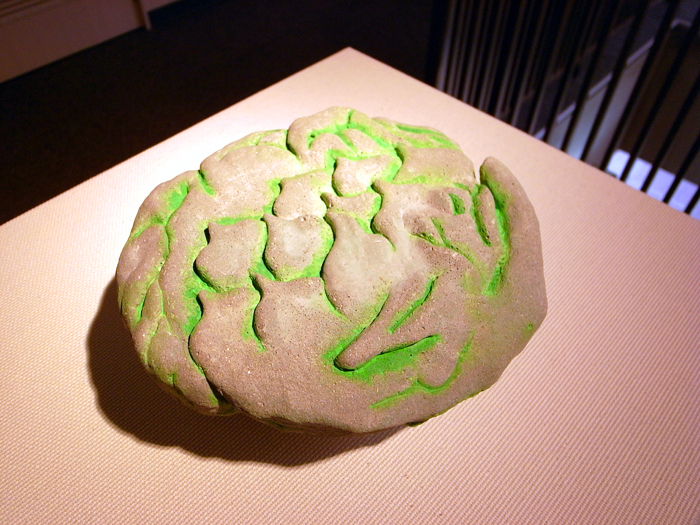 A Melting Drum
2009
Silicone rubber, magnet, iron sand, polyvinyl chloride, concrete stand
The work gives shape to the woman who is always behind Shiina. The monk said that Shiina has an aspect of troubles with women for this person. The concrete stand of this type is generally used for setting clothes pole in Japan. 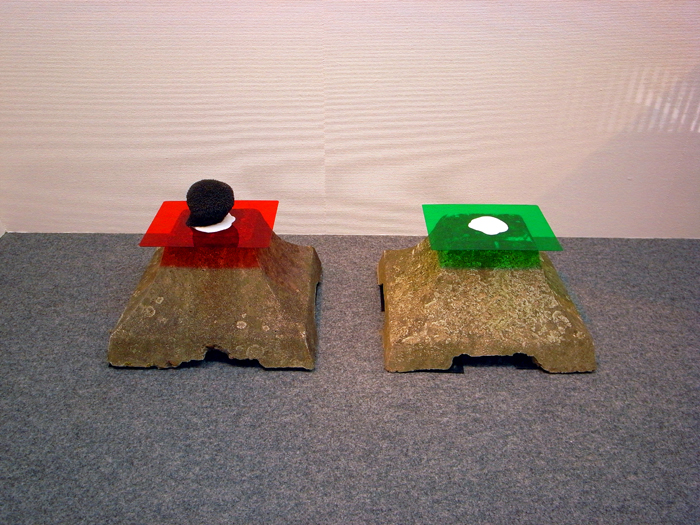 A Tree on the Ocean
2009
Mortar with paint
40×21×23cm
The monk says there is no contingency, and everything is predetermined. It was all prepared that Shiina meeting up with the monk, picking up a stone which is not allowed to pick up, and to be sculptor who handles clay. It is fear to know yourself who have deep darkness of mind but light is not advanced ahead if there is no darkness. It is very possible that the self which considered as a light turn to be a shadow, and the other self which considered as a shadow turn to be a light. “Never talk to people about what I am going to talk to you hereafter”. 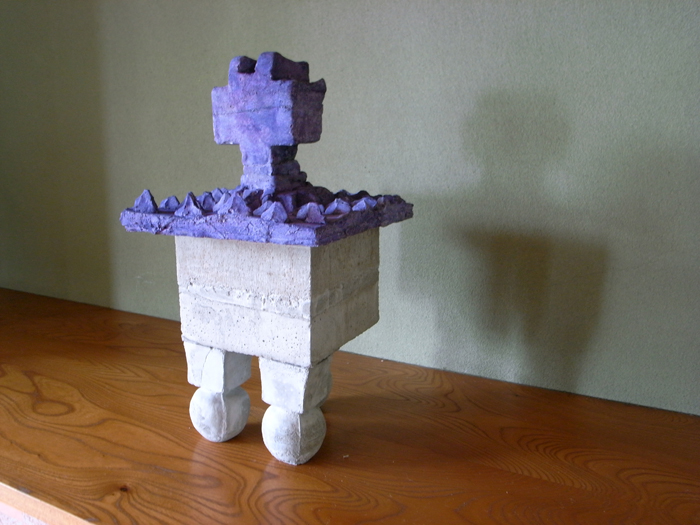 Rising Dragon / Scene from “The Primate”
2009
6 min 59 sec, DVD
One day, Shiina and the monk were playing with water pouring into slide near their residence. According to him, this slide is an aisle for the Lord of Dragon coming down to our place and he find the face of the Lord of Dragon among the shape of the water flowing. He says the Lord of Dragon swims to avoid wicked thoughts and evil conscience, and can fulfill someone’s urgent wishes. 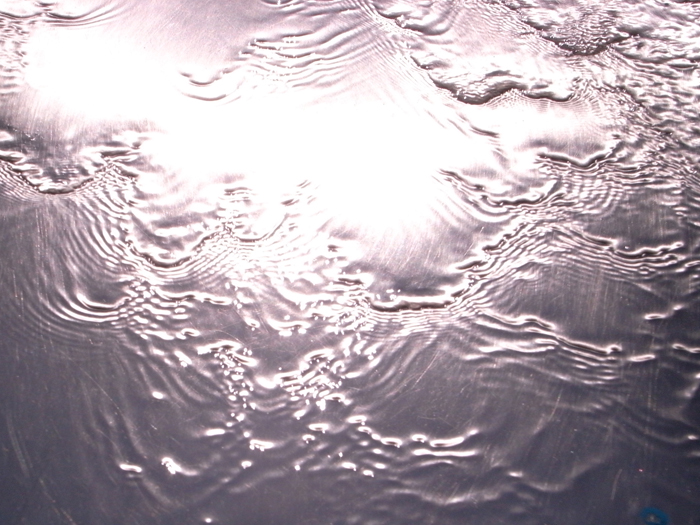 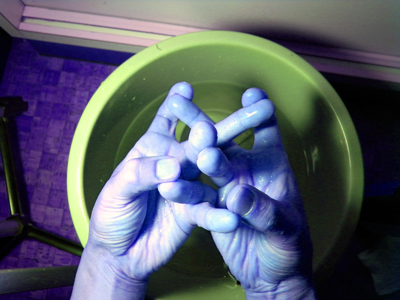 24 Pupils (6 pupils)
2009
Joined sunglasses, silken gut
4.6×15×14.8cm
When Shiina met up with the monk for the first time, Shiina asked him, “Do you see something behind me?” The monk reproved Shiina, “Seeing can only reveal one of a surface of thing. Itʹs only fragment of the whole.” The work is based on this experience and his phrase. The title of the work is associated with the title of the film “24 eyes” which was set in Shodoshima Island. 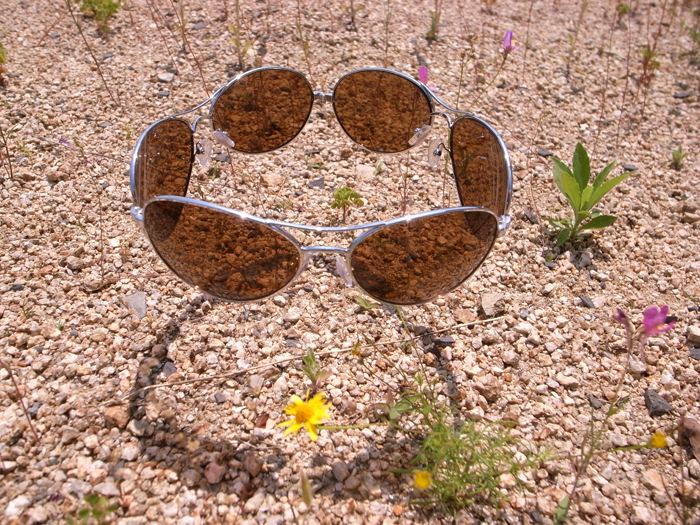 Psy
2009
Tin, gravel
3.8×8.3×2.6cm
The psychic who Shiina met in Shodoshima Island was a person of religion, a Buddhists. The conversation moved naturally to Gautama Buddha’s word “Walk alone like the horn of a rhinoceros.” Shiina asked the monk, “Why rhinoceros?” He answered, “Rhino is an herbivorous, gentle animal but it has a splendid horn so carnivorous animals can’t close to it easily. Moreover, if a fierce animal come to close to rhino, rhino doesn’t fear and never run away. This is what rhino is quietly strong enough in peace.” 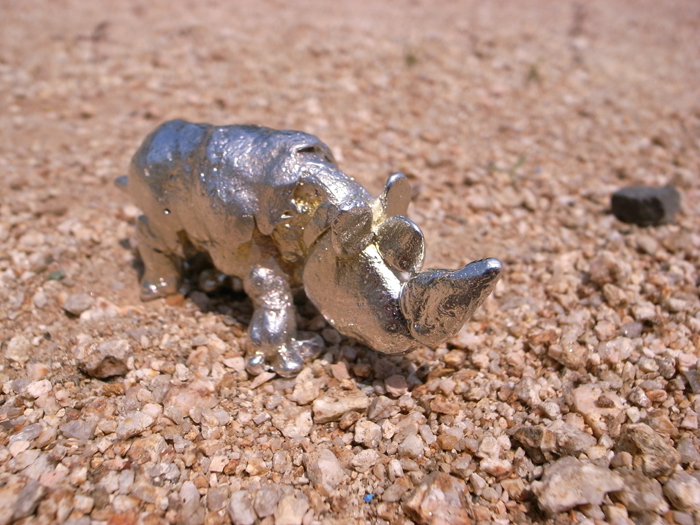 Here we have seen the works from 2006 to 2009. As I didn’t do any production activity at all for the year of 2005, the works on this portfolio are the progression from “Kazan‐yaki: magma‐firings” which occupies a major position of my activity after 2000. “Kazan‐yaki” was an investigation of “the plasticity of time” which through transformation of material, to challenge to fire plastic figure which is formed out of clay, which is a kind of mineral, at active volcano where the place of most minerals on the earth coming from. Then two dreams I had triggered an awareness of that past time remain itself in the memory of all matter, and if we pursue its actual condition, matter verges on what we call an “image”. I think that this finding was growing into the installation “Starring You” on the opening page, then until now, I have been chasing a phantom of the human spirit and have attempted to embody it. I had felt the risk from the beginning that the consequence of this discovery may fall into so‐called solipsism, “Urato Drift” and “Kappa Complex” at the head of the list, the projects through communications with others has increased in this period. “Kappa Complex” started on the assumption that Kappa, a Japanese legendary water imp, is an aquatic human race, the project intended to form the very core of human existence through synthesizing the images of Kappa that people who experienced Kappa has and making a statue of Kappa based on that image. But in this 2009, I coincidentally returned to the starting point that is in the motif of dreams, and also at the same time I was to step into uncharted territory of psychic vision. I need to study the matter further to put my experience there into words but it is also true that I feel like I have a hunch now. For instance, the monk who is gifted with clairvoyance says that the thought once people have doesn’t disappear, and stick to the person like iron sand attracted to a magnet. His idea closely resembles mine that I knew by intuition in 2006 that “past times remain itself in the memory of all matter…” The monk’s words led me to make the work series using iron sand (e.g. “Tuning fork”) but I still feel that I have not finished it yet. Moreover, having begun to crystallize the idea of “Photosynthesizers” project in the same period of Kazan‐yaki which was started in 2000 was another big departure in a current activity. “Photosynthesizers” has a bit science fictional motif which explores a hybrid of plants and humans but a concrete performance to plant seeds to human body was highly influenced by researching on self‐mummified Buddhist that remains a lot in Yamagata in 2007. How “spirit” of the human and natural world involved with body and matter? Now I am going to quest and give shape to them through the way to make sculpture. (Takehito Shiina, Sep. 2009) 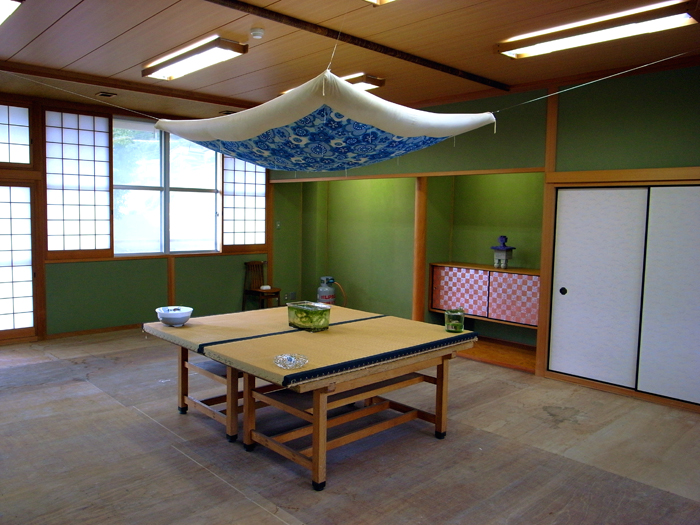