Kappa Complex (2007)
Kappa is a one of traditional imaginary creature in Japanese folklore. The aim of this project is to create the image of contemporary Kappa based on the collected information of Kappa experiences. Those information includes the report of Kappa witnesses, the drawings of the witnesses, relic of Kappa, or even the person who is called “Kappa”. They are morphed and visualized into one image of Kappa. The project mainly consists of the video and sculpture. It refers to the methodology of the studies such as “Hearing about Kappa” (ca 1805) “Suiko‐Koryaku” (1820) and applies them in the current context. This project is related to an artist‐in‐residence program, ARCUS project in Moriya city, Ibaraki, Japan in 2007. Ibaraki has a rich environment of rivers, ponds and lakes. Such environments must be a one of the origin of Kappa folklore as Kappa is a type of water sprite, has to live in water. See below to know about the details of traditional Kappa. 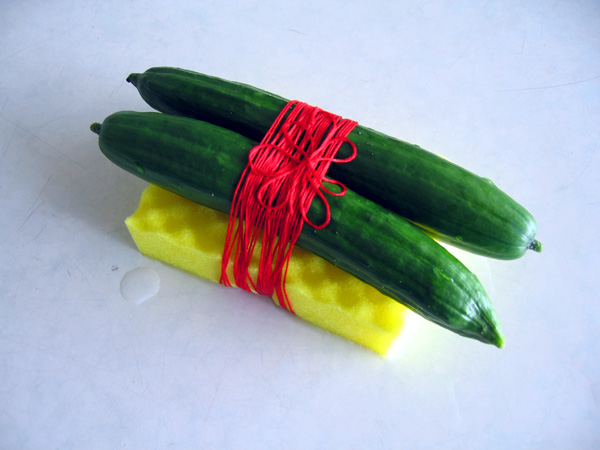 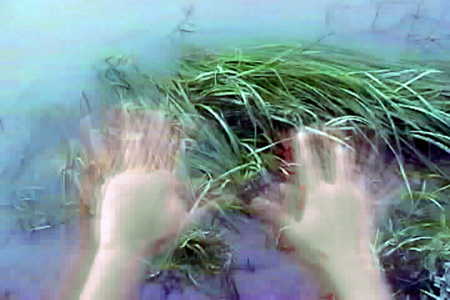 There happens a persistence of vision, when you move your fingers quickly. It might be seen like a web of Kappa. 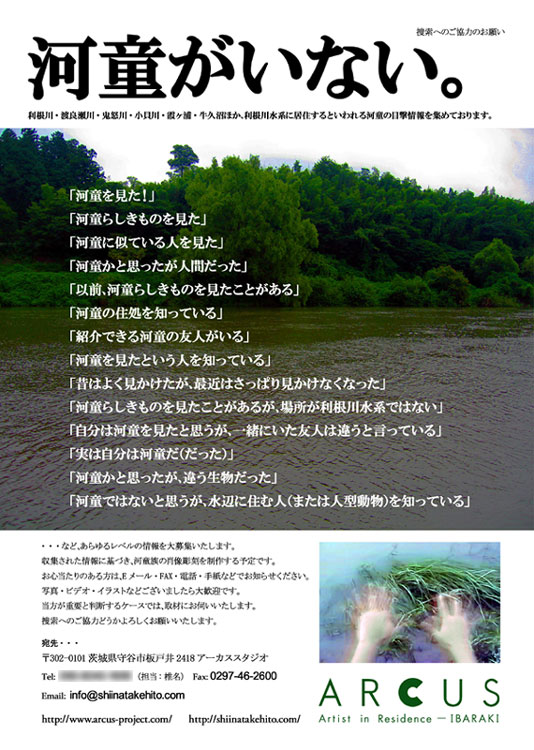 Distributed flyers like above to collect information of Kappa experience.

In the film “Sketches for Kappa Complex”, collected visual images of Kappa are being synthesized sequentially by morphing technology. In picture above, time progresses from left to right. The synthesis is divided to 10 stages as 10 pieces of Kappa information was gathered. The lower right image eventually became a final image of Kappa. 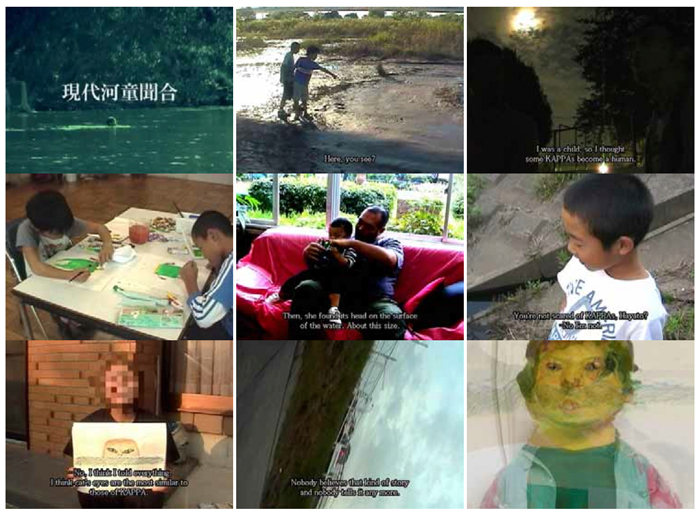 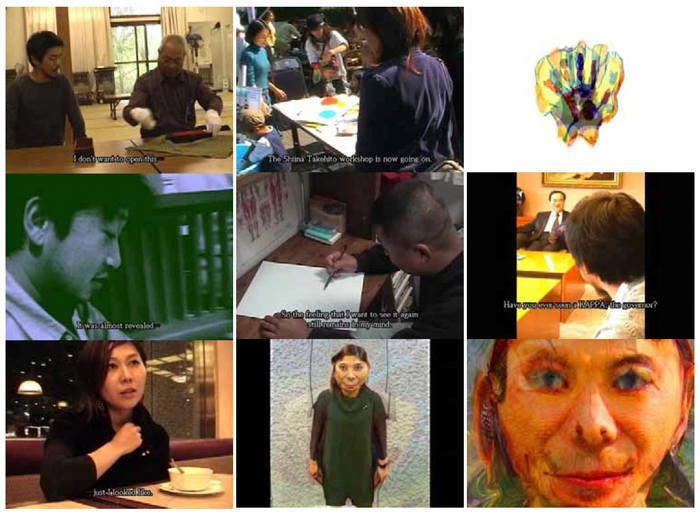 A film “Hearing about Kappa” is a document, a record of interviews with people who had a Kappa experience. The contents are not only just a collection of witnesses but also including such as, two boys who found Kappa’s footprints, adults talking seriously about their witnessing in childhood, mummy of right hand of Kappa, man who has been branded as a Kappa, workshop for children to make a picture of your hands get webbed, question to governor about Kappa, Kappa legend talking by a old woman, and children playing Kappa’s pond, etc. The collected information of Kappa is not verified, not analyzed, but shown as a plain fact.

Workshop for children, “Unseen Web”
Related program for the artist‐in‐residence in ARCUS project,
“Imagine your hands get web and draw it.”
October 21, 2007 Moriya, Ibaraki, Japan 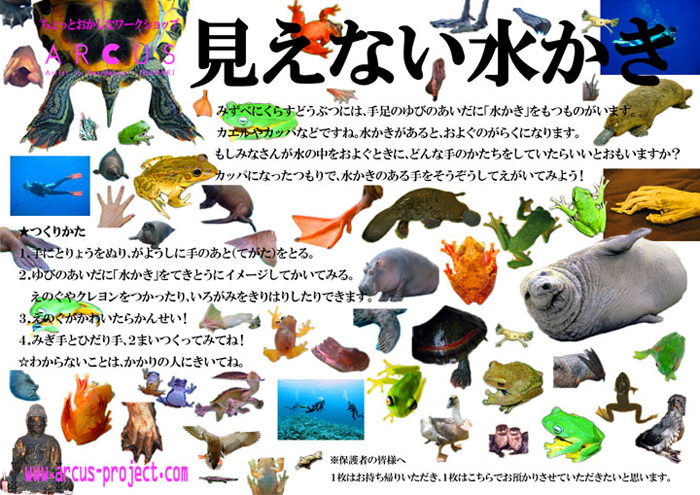 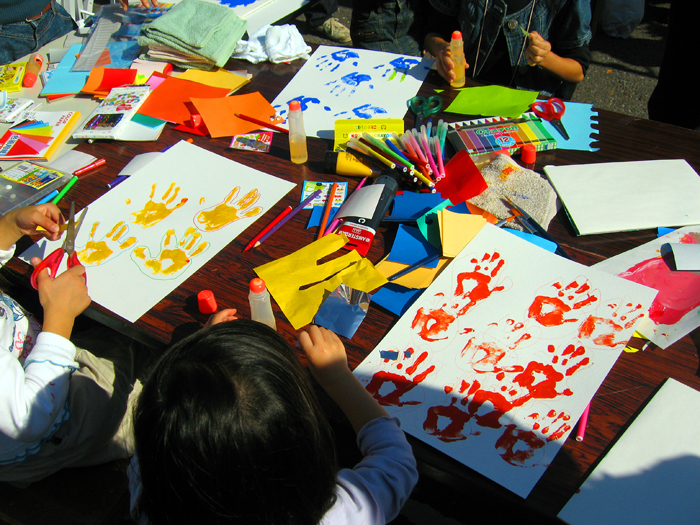 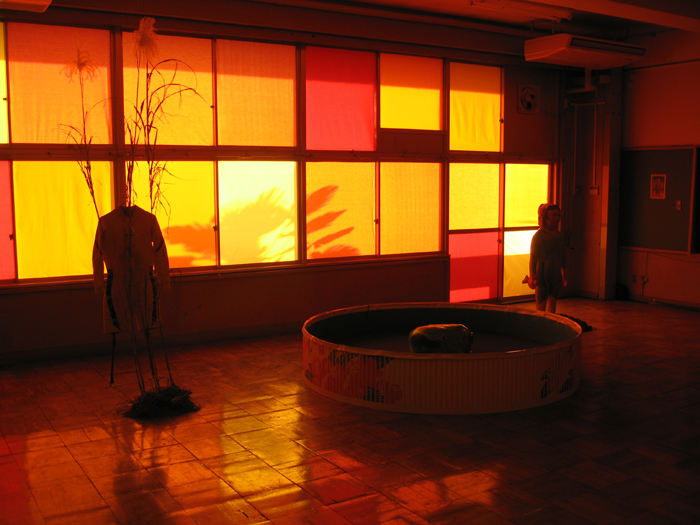 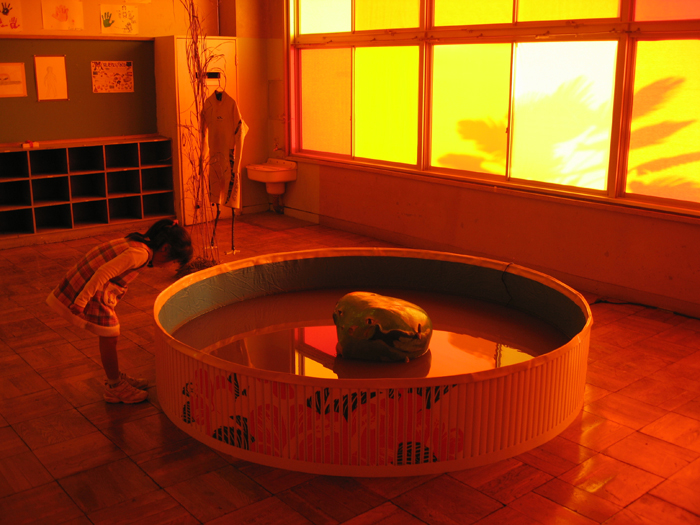 Installation at ARCUS studio includes sculptures of Kappa generated by morphing, and films show the morphing process. Orange cloths covering the windows of the room create a unique light environment. This represent such as the light at dusk based on the legends of Kappa in Ibaraki, “Kappa can often be seen at dusk”. 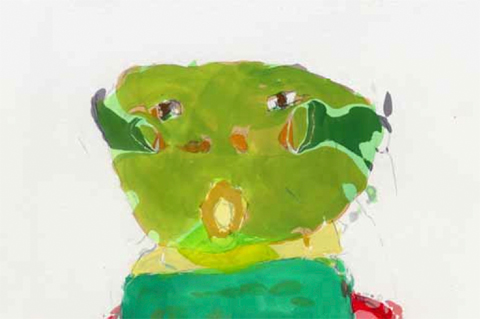 The sculpture is based on the image above which is combined with two images drawn by two boys who found footprints of Kappa.
The image was converted into three‐dimensional sculpture.

The face of combined Kappa of 21st century

What is KAPPA?
“KAPPA is Ourselves, Human Being.”    Tetsuo Sekiguchi (Sightseeing Advisor, City of Ushiku)

KAPPA is a small specter living in the water such as rivers and ponds, which has been distributed all over Japan from old times. Its shape, characters, and nicknames are varied place to place, however KAPPA’s typical feature is defined; its shape is of a human child, its body is slimy, its head has a dent called dish, its hair is radiated, its mouth is beak shaped, its back has a shell, and hands and feet are webbed.

KAPPA is; good at swimming, loving cucumbers, stealing vegetables from farm yard, pulling children and horses into a river to drown to death, groping and raping women, challenging sumo wrestling with men. In many folktales, in the end a KAPPA is caught by people, and begs for its life. In return for forgiveness, the KAPPA gives secret elixir or fresh fishes to people.

According to the studies, the typical KAPPA image which is known today was established in 18th century during the period of national isolation, which herbalists (then naturalists) combined different sources such as legends, sightings and narratives. 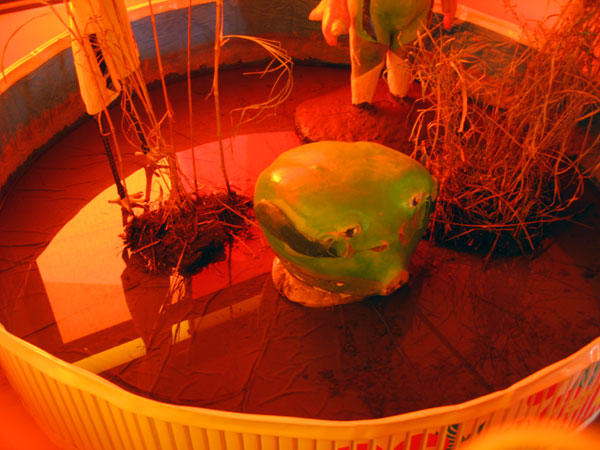 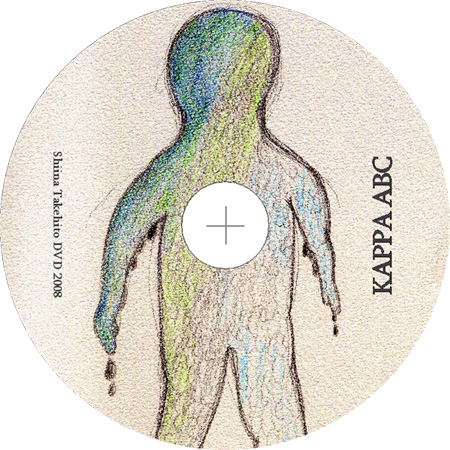